As for the kit, it’s a very simple shortrun made by Fly (also later reboxed by AZ Model). In my opinion, the main flaw of the kit is the engineering of the clear parts – contrary to the 1/48 Eduard kit, the rear windows are separate parts, therefore it’s virtually impossible to glue them in neatly.

I made the following adjustments:

As for the paint job, there are no decals apart from the little logos on the propeller (taken from ICM He 51), everything else is sprayed using my own masks. On the left side, I sprayed the 44°4 codes too much towards the front. Thing is, even though the code is reversed on the other side (44°4 vs. 4°44), the roundels shouldn’t be on the same spot on both sides (like on British airplanes etc.), but shifted, so not the roundels, but the outer numbers align against each other (phew, I hope this is comprehensible :)).

The RLM 24 blue is MR Paint – this is my first experience with this brand and probably also the last, because of the terrible smell 🙂 This was amplified by the paint poor coverage, so I had to spray a lot of layers (although I guess this is because of the specific bright blue shade, while other colors would cover better). I am used to Gunze C and whatnot, but this was too much for me. Apart from that, the paint makes a very nice, fine-grained gloss finish… but this could be achieved with other manufacturers’ products as well, without poisoning yourself and your neighborhood 🙂

That’s all. The build was relatively simple and fun, the only challenge was to mask and spray the natural metal frames of the canopy – I did my best, but they still look quite fuzzy in some places.

Anyway, let’s move on to another kit. Comments and criticism welcome! 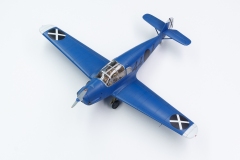 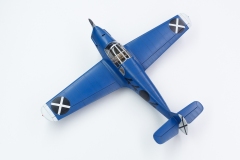 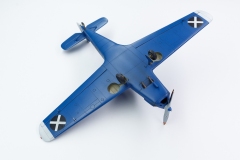 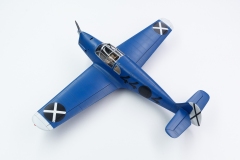 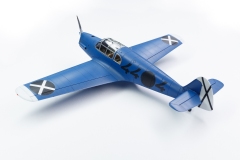 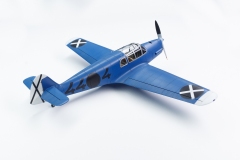