RWD-8 was a Polish parasol wing monoplane trainer aircraft used as a training and sports plane. The type was designed in the early 1930s by the RWD design office (Rogalski, Wigura, Drzewiecki). It became the most numerous type of aircraft manufactured in interwar Poland, and between 1934 – 1939 it was widely used by the Polish Air Force and also civilian owners, especially aeroclubs. The aircraft was produced in two main variants marked PWS and DWL according to the parent plant. Most of the production for the army and civilian customers came from the workshops of PWS (Podlaska Wytwórnia Samolotów), because the usual RWD aircraft manufacturer, DWL (Doświadczalne Warsztaty Lotnicze), did not have sufficient production capacity. In the DWL plant, only small-scale production of RWD-8 for civil aviation took place. The main differences between the military version PWS and civil version DWL were mainly in the cockpit and fuselage of the aircraft, the size and location of the luggage box, landing gear covers, cable guards under the cabin, exhausts, and some other details, such as additional instrumental equipment mounted outside the cockpit. You can read more about its history on Wikipedia. As it is a very widespread interwar aircraft, quite a lot of photos can be found and thanks to the Polish National Digital Archives (Narodowe Archiwum Cyfrowe) they are often very nice and high quality. You can find the search page here, search with the keyword RWD-8. As Murphy’s laws already work, I missed the photo on the SP-AMT during my first search and found it by next searching for additional details during the completion of the kit…

The IBG model kit was issued in 2015 in both versions PWS and DWL and then was three times reboxed with different markings. The manufacturer puts the corresponding parts of the fuselage, undercarriage, and exhausts in each box of depicted version, which solves the main differences between the two versions quite well. Parts are injected relatively cleanly, the kit promises a simple construction, and in essence, it is like that. The biggest fail of the kit is the wing and also the representation of all control surfaces and the folding part of the wing (due to the possibility of folding the wings, a part of the right part of the wing was foldable). Leaving aside the fact that the wing itself has a different number of ribs, depth, shape, the absence of relief at the bottom and other flaws, the worst of all is the very rough and disparate details of the control surfaces. Here, it will only help to cover the surface with some putty and then carefully grind the surface – if you do not want to buy either the wing itself from Karaya or the whole set of wing and control surfaces (and as a bonus also the wing fuel tank for RWD-8a) from Attack Squadron. Another visible mistake of the kit is the upper fuselage struts, which have a molded cross reinforcement – which, however, consisted of wires. Here it will help to cut the strut parts, glue them separately and then add reinforcing wires. The third problem of the kit is the dashboards because half of each dashboard is molded as a relief on each side of the fuselage and this leads to very bad-looking parts. You can solve this with Yahu dashboards, Part etchings, or make the corresponding parts yourself, the kit contains nice decals for dashboards and they are of a simple shape itself, so nothing difficult here. Especially for the civilian version, I advise making new cover plates behind the seats – if you do not decide to make the interior complete with a tube construction because the same problem as with dashboards is behind the seats… The last visible omission of the kit is the absence of the engine, the front mask contains only a shallow recess, and it is not very nice. You can solve this again with the resin set from Attack Squadron, otherwise, you can choose to make it itself. In this case, the hole in the front of the mask has to be cut out and ground, and that one visible cylinder can easily be made from some spare parts. It should be noted that the Part PE set includes more useful details, not only the dashboards, but also cockpit doors, engine covers, complete seats, seatbelts, pedals, drawbars, and other nice little things, so it’s a clear choice for detailers – but then the new wing, control surfaces, and engine are more than desired, but then it will be an IBG kit anymore, isn’t it? Well, I took care of the mentioned problems by myself. I did the putty-and-sandpaper work on the ailerons, then made some cockpit improvements. I milled the seats, added the seatbelts from trimmed 3D decals Quinta Studio (unfortunately, I haven’t seen this generic set on the market for a long time and no other generic set of seatbelts in 1/72 is available, AFAIK), made the dashboards, and also cover panels behind the seats. I also added pedals, steering rod, and other details in the cockpit including the fuel tank and engine bulkhead, and also the one-valve engine, and the exhausts. After solving the wings, struts, and interior, the construction is a simple task, but it would still be considered to replace also the struts under the horizontal tail area, and do not forget to make the handles on the rear of the fuselage from some wire. 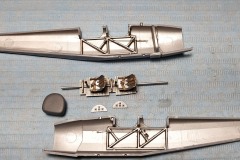 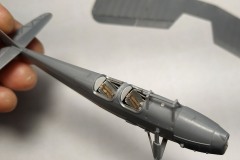 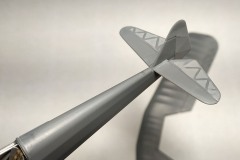 The instructions state the usual silver-and-red civilian scheme as a “gray-white” and “scarlet”, which I personally think is a mistake. I preferred to stick to the colors of the decals and also other Polish sources and chose a more traditional combination of silver and slightly darker red colors for the “camouflage”. When applying decals, I found that the code letters on the wings are smaller and on the fuselage – on the contrary – larger than they should be. However, it was at a stage when there was no other choice but to accept it, as I didn’t want to waste more energy on it anymore. I added control cables and reinforcement wires from the elastic thread Uschi van der Rosten (Fine) designed for the 1/48 scale, but it fully suits me for the 1/72. The instructions for control cables and wire reinforcements are missing in the kit, so follow the photos of real machines (they were double or even triple on some sections!). Windshields would probably also deserve replacement, however “it suits my home showcase well” as they are… Beautifully printed Techmod decals are very thin and they tend to roll, so the application was a bit more difficult. After applying them and overcoating them with Tamiya Mark Fit (Strong), they blended beautifully with the surface. Gunze C and GX paints and varnishes were used as also AK 3rd Generation Acrylics and Vallejo Game Colors, model was finished with Tamiya Panel Line Accent Colors and CMK pigments. I think that this kit, despite its faults (which you can either choose to repair or not) could be a good choice for most 1/72 modelers! 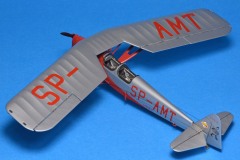 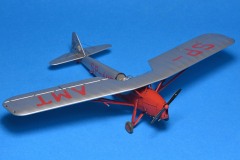 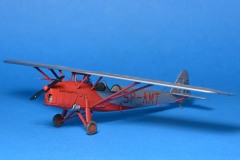 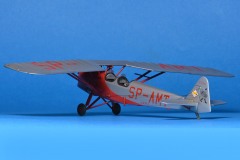 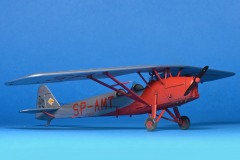 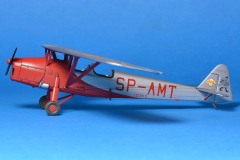 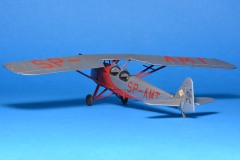 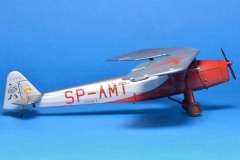 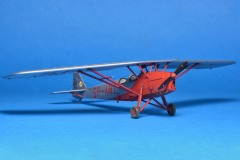