Saiman 200 (or rather S.A.I.M.A.N., as it was a product of another Italian acronym-named producer like SIAI, CANT or IMAM) was a relatively insignificant trainer plane, serving in the Italian air force from 1940 to 1947. In 1/72 it was made by an obscure company Jach, later reboxed also by AZ Model. The kit is not bad, parts are clean and fit together reasonably. Everything is really simplified though (even considering how simple the real thing was).

I made a small hint of the engine (or its first visible cylinder), cut exhausts from brass tubes and new windshields from acetate shaped with hot water.

Rescribed all the lines along the control surfaces (deleting the weird rendition of hinges).

Scratchbuilt a rearview mirror. (I guess the instructor communicated with his pupil through it?)

Made a PE pitot tube with that typical upside-down-T appendage (I am going to sell those as Airone Hobby mini PE) and a new venturi tube.

PE seatbelts are also Airone Hobby, taken from the set for Macchi C.202 and C.205.

Rigging is, as always, made with fishing lines threaded through holes in the upper wing.

As for the overall surface, well, since the real thing was almost all made of plywood, there wasn’t really that much to highlight. The camouflage choice isn’t spectacular either, except for a Croatian version (I preferred an Italian machine though).

At least I lightly riveted the metal cowling, but the rivets came up a little too fine and are visible only here and there and from a certain angle. OOB decals (made by Boa) didn’t look too good and in the end, I replaced all of them but the black letters and numbers, using my stash of Skymodels sheets. Tricolores on the tailplanes are airbrushed.

I started the kit hoping for a quick build, but in the end, it took just about the same time as a normal model. The main setback were the windshields, which I reworked several times. Apart from that, all good.

Well, here it is. Not exactly impressive at the first sight I guess, but at least it’s an unusual subject 😉 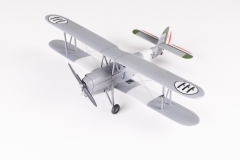 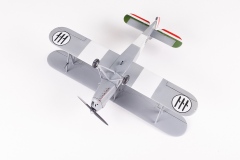 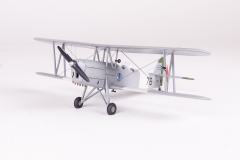 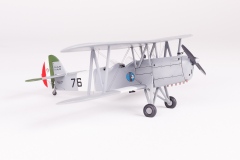 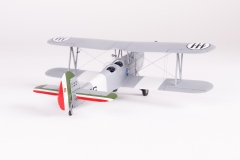 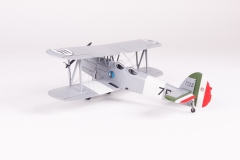