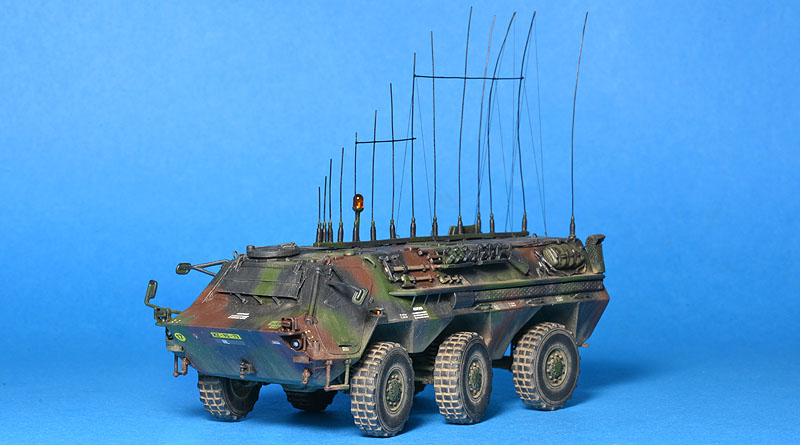 The Transportpanzer 1 Fuchs was produced mainly in the 1980s in Germany by Rheinstahl Wehrtechnik (today Rheinmetall MAN Military Vehicles) in several variants, mostly amphibious and mostly for the German Army. The exception to amphibiousness is mainly represented by vehicles for radio-electronic warfare, such as EloKa variants. The 1A1 variant with a bunch of antennas of an EK33 jammer on the back was given the name “Hummel” (“Hommel” in Dutch), which means bumblebee – because of its typical buzzing during the operation of the jammer. In addition to the Bundeswehr, the USA, Saudi Arabia, and the United Arab Emirates, the Netherlands was also an important customer, purchasing 24 electronic warfare specials. You can find more of the history of the Fuchs, including a nice overview of the variants, on Dutch Wikipedia. Photos of the original model can be found on Primeportal.

Revell’s six-wheeled “fox” (which behaves as a “bumblebee”) kit in a 1/72 scale was released in 1999 as the basic A4 (1A4) version. The EloKa version followed along with the ABC version in 2004. Sometime around that time, my brother bought this kit, and while looking for some reference material for the “menacing forest of antennas on the back”, he came across photos of the Dutch version. While I prepared the decals for him, he started building and modifying the model. The biggest differences between the Dutch and German versions are in the amount, type, and arrangement of the equipment carried, and my brother took all these subtle differences into account on the model. However, then came his first job, marriage, first child… and as it happens, he did not return to modeling (with a few exceptions). He definitely put the models away last year, when he donated to me his remaining assembled and non-assembled kits. The Bumblebee lacked the least to complete, so I started with it. I found that my brother did a great job and my duty was just to clean some minor flaws, attach details and complete the kit. After that, I went on priming and coloring the model. The only thing that needed more attention was my own decals, as they were created more than 15 years ago… The technology of small series decal printing is nowadays completely different in terms of finesse, and also my drawing skills are a bit better, so I revised the sheet, completed it, and let it printed by APC Decals. The big challenge then was the production and fitting of the wire antennas of the jammer, for which bristles from a large paintbrush and Uschi van der Rosten elastic fiber were used. The finish was, as usual, provided by washes, oil paints, and pigments.

What to say in conclusion? The Fuchs from Revell is a nice and fairly detailed model in its basic form, and if you refine some detail here and there (you can buy Hauler etchings for the Fuchs, or their predecessor Extratech), you can get a very nice scale model of an eye-catching modern machine. The completed model attracted me so much that I bought another modern AFV kits from Revell and, depending on my current mood, I will be happy to make some modern AFV again! 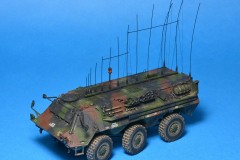 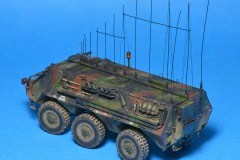 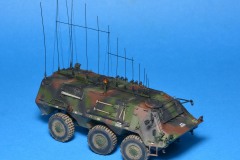 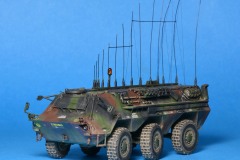 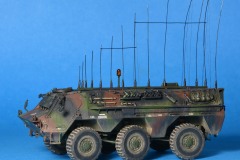 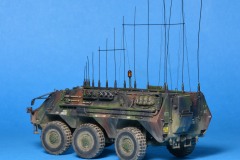 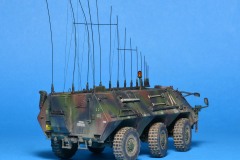 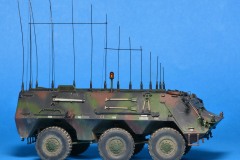 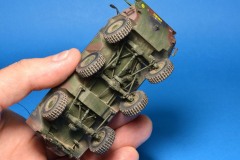