The type F-104G was widely used by NATO members in the seventies. It was also manufactured under license in some of those countries. The biggest number of planes was used by the German Luftwaffe. However, my choice is the F-104G of Koninklijke Luchtmacht. Netherlands had 139 Starfighters in total, mostly from their own manufacturing (Fokker). Their duty was quite boring, but I found one interesting event: the 322 squadron participated in an anti-terrorist action. In 1977, nine Moluccan terrorists hijacked a Dutch train and stopped it in the fields between villages. After 20 days of unsuccessful negotiation, the government decided to raid the train and liberate the hostages. At the beginning of the raid, six F-104 from the 322 sqn were flying over the train, the roaring sound of their afterburners distracting the hijackers and masking the noise of the attacking anti-terrorist unit. During the raid, two hostages and six terrorists were killed. In the following link, you can find details and all the context of this event: Dutch_train_hijacking

Plane D-8319 was a member of combined 322/323 squadrons. The 322 sqn traces its roots to a WWII RAF squadron, consisting of Dutch pilots. Both squadrons 322,323 were based in Leeuwarden and were strictly specialized for fighter missions.

I built this kit as a contribution to a Century Series (U.S. F-10* planes, i.e. F-100, F-101, etc.) group build. First, I had to choose between Hasegawa and Revell kits. I chose Revell, as I thought it’s newer and also better than the other option. However, later I obtained the Hasegawa kit as well, especially because it contains alternative parts like exhaust nozzles, which reflects both possible variants of F-104G with different engines. In fact, the Dutch F-104 from Revell has a different nozzle. When comparing both boxes, I realized Hasegawa is not worse, actually, some small details and a separate canopy piece is slightly better. Very nice decal sheets for German and Italian planes is another bonus. Even though some of the kit parts show their age, eventually I decided to build the Hasegawa F-104.

Soon after I started, my workroom became a Bermuda triangle. I have never lost that many kit parts before. First, the control stick disappeared, then quite a big part from the undercarriage, and then also a small AoA probe part. All the parts had to be made anew from scratch. The build itself was straightforward, except for the intake assembly. I adjusted some details on the fuselage, according to photos of Dutch planes. I didn’t glue clear parts of position lights but filled the hole with clear varnish and then added transparent color. Well, someone could say, such a build should take two nights. Not for me. It was much more longer as I got bogged down in thousand little steps like retouching, panel lines corrections, correction of corrections, color correction after panel lines correction, cutting the canopy and cleaning it from inside… uff, is anybody actually still reading this? 🙂 If yes, I won´t torment you any longer with a story which you certainly know well from your own experience. In the end, there was a happy ending anyway when I put the newly finished kit into the display cabinet, looking at it with joy. 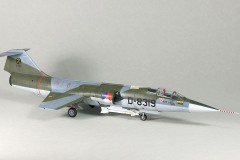 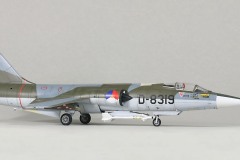 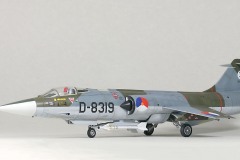 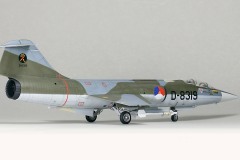 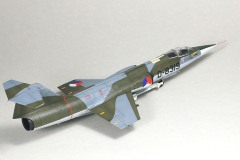 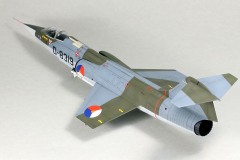 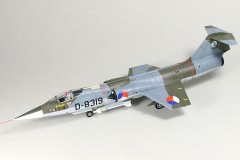