Avia BH-3 was a fighter plane designed by Pavel Beneš and Miroslav Hajn for Czechoslovakian Air Force and holds the position of one of the first monoplane aircraft ever put into serial production worldwide.
The aircraft had a low wing design with its frame made of wood.
Wings had a rather high profile, their thickest part modified for mounting struts. The wings were partially covered by plywood and then completely covered by canvas.
The fuselage and stabilizers were covered by plywood, rudder and ailerons by canvas.
It was powered by a BMW IIIa engine (licensed Walter IIIa) with 185 Hp, which gave the aircraft a maximum speed of 225 km/h. The engine itself was covered by dural metal sheets for protection.

Three prototypes in total were produced (the first one was destroyed during an accident) and in 1922, ten planes were ordered for production.
Test pilots praised the plane’s speed and agility, however, the military pilots were less impressed, as they were used to much more stable biplanes which were easier to handle.
The new Avia, on the other hand, required the pilot’s attention during every part of the flight and was difficult to land safely.
Due to several accidents in rapid succession, the remaining planes were transferred in 1924 from the First Air Regiment in Prague to a Flight School located in Cheb.
A rather strange decision, considering the fact that even skilled pilots had problems handling this aircraft.

This model represents the third built prototype, sharing the same serial number as the other two – number 1. In this presented form, the prototype participated in the race for the Trophy of the President of the Republic in 1923, piloted by Karel Brabenec.
Changes for the race consisted of removing the machine guns and covering the gun ports.

The model kit was made by old Kovozávody Prostějov. The general dimensions are correct so I was only focusing on details.
I made an entirely new cockpit, radiator, and windshield (acetate).
The wings needed new ailerons and ports. The bottom side was sanded into a correct profile and the trailing edges were made thinner.
Wings struts were greatly reduced in mass and I added connecting cables made out of wire.
The engine cover was heavily modified. Cooling ports and cooling fins were added and I had to move fuel tank vents since their location was changed for this specific prototype.
While the machine guns were removed for the race, the holes for breeches remained, thus I filled the gun ports with putty and created holes for the breeches.
Exhausts had to be removed from the model since they are located in the wrong place (I suspect some issues in the production process). I created new ones, using heat-treated injection needles.
The shape of the vertical stabilizer was slightly modified.
The profile of the landing gear had to be weakened and I had to lower and narrow the tires, plus add rubber shock-absorbers.
The tail skid is new, made out of wire.

Even though this is an older kit, it can still be used (with a bit of effort) to create a nice model of a plane, which is strongly associated with the history of the Czechoslovakian Air Force.
The building process can be found on the Modelforum website. 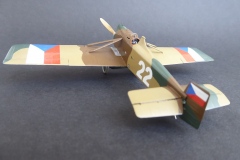 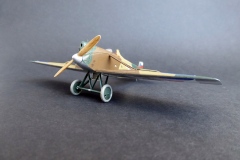 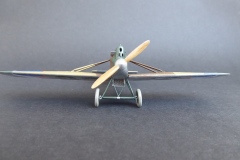 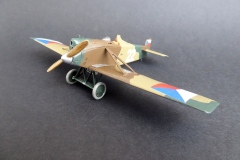 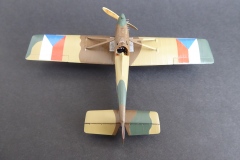 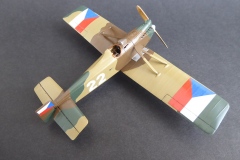 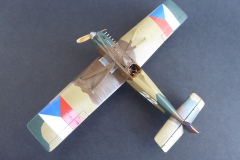