Fast and furious, these words could describe not only the result but the Macchi M.C.72 development process as well. This graceful aircraft was developed in 1931, directly for the Schneider Cup floatplane race. However, due to engine problems and the deaths of two test pilots, it did not participate in the competition. Nevertheless, development and testing continued. In 1933, Francesco Agello (the last pilot of the four who were to take part in the Schneider Cup and who survived the development and tests) set a world speed record to 682 kph. A year later, he broke his own record with 709.2 kph, and to this day, the M.C.72 is the fastest floatplane in the world. A total of five pieces were built. 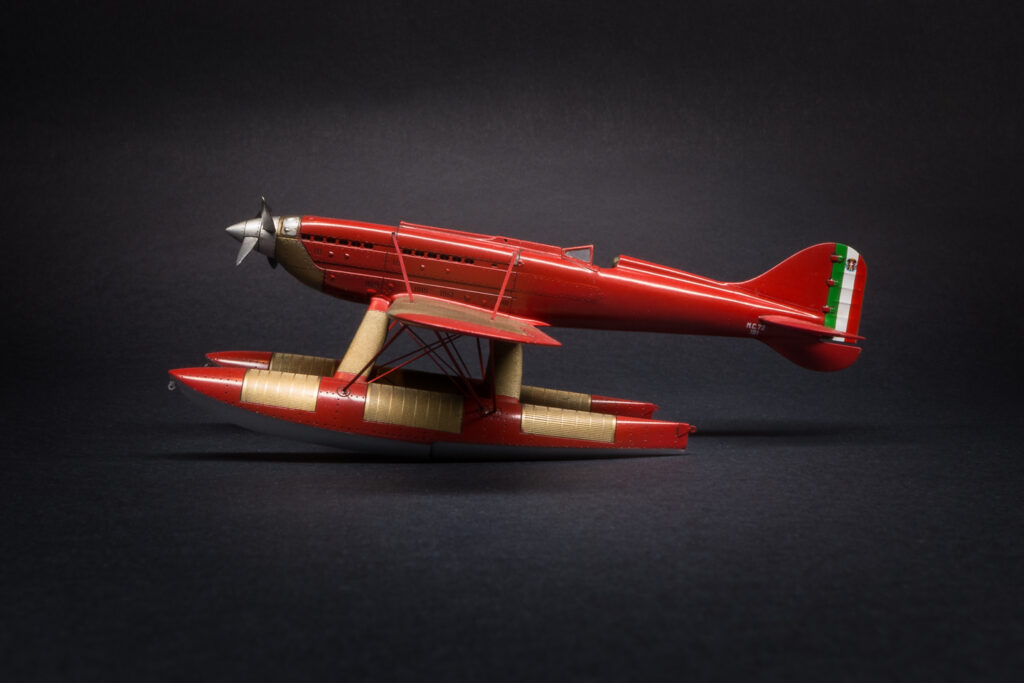 For a modeler interested in the Golden Age of Aviation, this is one of the essential types 😊. There is an obvious choice in 1/72 scale, a resin model from SBS Model from Hungary. They even make two versions of the Macchi M.C.72 – an early version from the beginning of tests and a plane that set a world speed record. In the box, we get thirty beautifully cast resin parts complemented by a small photoetch and a mini sheet of decals. Assembly does not take more than one weekend. Everything fits perfectly and with the use of extra-thin cyanoacrylate glue, it can be compared to building a regular plastic kit. There are quite a lot of photos of M.C.72 machines and even a movie from the record flight. From the photos, I learned that the machine serial number M.M.181 at the time of the record flight on October 23, 1934, did not have cooling gills on the fuselage behind the cockpit. These are present on the fuselage parts and represent a machine configuration with a different serial number. According to the photos, I filled the cooling gills with a two-part putty. The assembly of the floats with struts was a bit difficult (at least for me). Each time I checked the geometry of the freshly attached floats, the model slipped out of my hands and the struts with floats broke off. It happened three times. On the fourth attempt, I finally succeeded and the floats remained in place. After attaching the floats, Macchi seemed to come to life. The next step was to make the flat rigging between the fuselage and the wings. For the less skilled, like me, SBS provides etched parts. I had to trim their length a bit and replace some of them with a 0.3mm brass tube. As for the paintjob, the choice of the right red is important. I used the Gunze C158 Super Italian Red, which is obviously the only right one, considering its name 😊 Alclad ALC-109 Polished Brass for surface coolers and Alclad ALC -105 Polished Aluminum for the propeller and cowling. After applying wash, I sprayed the surface with a light coat of gloss varnish. Macchi is ready to break records 😊
Thanks to David Henyk for the photos. 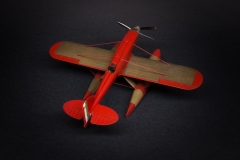 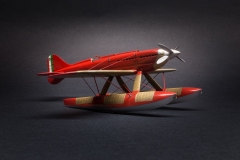 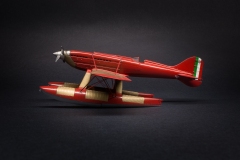 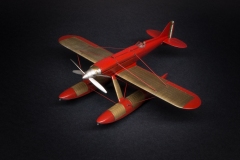