My latest model is Polikarpov I-16 type 10, also known as Mosca (Fly) or Supermosca. It was flown in 1938 during the Spanish Civil War by Eduardo Claudín Moncada. It seems he was quite a colorful character: aircraft engineering student, radical Marxist, intellectual fluent in three foreign languages. More than 190 cm tall, he barely fit into the cramped cockpit of the I-16. He was very popular among his comrades and quickly rose through ranks from escuadrilla leader to a commander of the whole fighter grupo. He scored at least four kills, two of them individually. Moncada perished after being hit by AA fire, according to other sources though, his airplane crashed a bit mysteriously without any involvement of the enemy. By the way, the civil war split the country in half even on a family level – Moncada’s brother was executed for taking part in the Frankist uprising.

I painted the model not according to a photo, but just a drawing from “Spanish Republican Aces” (author Rafael A. Permuy López, published by Osprey). It’s a pretty standard Mosca though, the photos of other I-16s of the same unit look the same. Note that I used the lighter, more yellowish tone of green, i.e the earlier “Protective Green” (Zaschitnaya Zelyonaya) used till 1937, not the later, darker AII green, which is perhaps more probable. I just didn’t sweat it too much regarding the one and only correct paint shade this time. In fact, what you see on the model is just a US Cockpit Green. The blue-grey undersides are painted with a color intended for F-15 and F-16 jets 😀 Both paints are Gunze C.

For the sake of completeness, it’s possible there was a squadron symbol, the face of Betty Boop on the tail, but I didn’t want to buy a whole Begemot sheet just because of one decal.

To build the model I used pretty much the only option, the I-16 type 18 (or rather type 24) kit by ICM. I enjoy conversions and this one was actually quite simple.

The kit has beautiful, super-fine surface details (sadly, most of them were lost and later rescribed during the building process), made by the legendary master modeler, mad genius Valentin Muchichko. All the important small parts are also excellent – for example, the wheels look like the most recent 3D-technology resin aftermarket.  The fit is also very good, the only part which is a bit problematic is the central bottom wing insert. The material is not prime quality (a soft, waxy plastic typical for earlier ICM kits), but I got used to it. All in all, the build was very enjoyable. There are some downsides given by the technology, but the kit is way above average of the shortrun industry standard.

As for the conversion, the differences between the I-16 versions are very well documented. Basically, if you want to backdate it, all you need to do is to remove more and more details (until you reach the type 4, which was just a smooth plain flying trashcan 🙂 ). I deleted some panel lines and cut/sanded away things like the cowling upper intake or wing reinforcement panels for mounting the rockets. The only radical modification was the lower part of the cowling. Later versions had exhausts bundled into pairs there, to make room for cutouts which accommodated a retracted ski undercarriage. I drilled out four new vents instead, each for one individual exhaust (made from brass tubes). I modeled and 3D-printed a new spinner and cowling front face, with closed shutters and the typical T-shaped intake on the bottom. Note that this intake was not present on some early type 10 Moscas (I am not sure about this particular one). 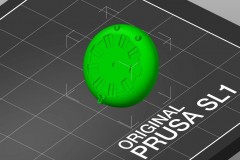 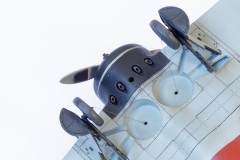 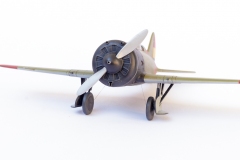 Since I ruined most of the wing fabric effect during the conversion, I had to recreate it somehow. As the half-ribs on the upper side are quite dense, I decided to try something new instead of the regular shading a la Airone Hobby. Instead, I used the “opposite” masks and made new ribs by building up layers of sprayed paint. I was very happy even with the first attempt, so I used the same method on the bottom side of the wing and on the tailplanes as well. 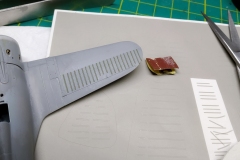 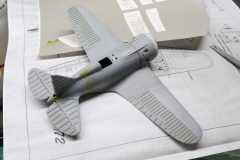 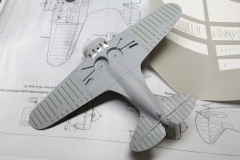 All the other small modifications are probably not worth mentioning in detail – new pitot and venturi tubes, gunsight, etc., just the regular stuff.

I am happy with the result, thanks to this conversion I got a model which is currently pretty much unique in 1/72 (however, little bird told me this will change in the near future..). Also, it’s a good proof of concept for recreating the wing ribs – a method which I’m certainly going to use again soon. I feel like I’m becoming a Polikarpov fighter enthusiast in the eyes of my friends 🙂 After I-5, I-15, 3x I-153, and this I-16, I guess the I-15bis will follow next.

That’s all. Enjoy the photos and as always, any criticism is welcome. 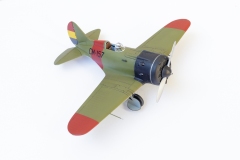 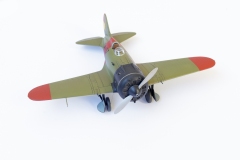 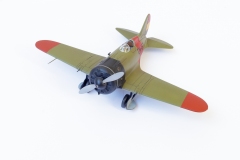 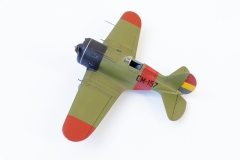 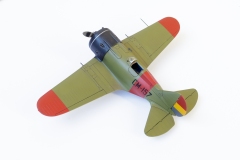 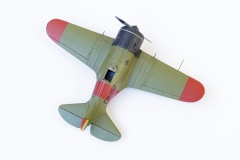 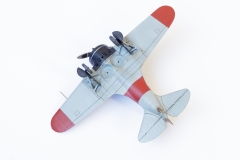 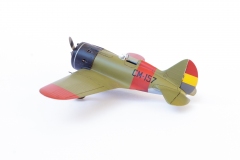 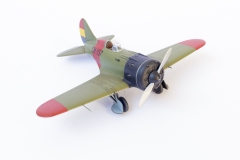