For my debut on 72insight.com, I selected my latest completed kits from Arma Hobby. As for the pre-war air force, what Avia B.534 means for us, PZL fighters represent for the Poles. Their history began in 1928 when the design work of Zygmund Pulawski’s team culminated in the takeoff of the first prototype PZL P.1. Other derived types followed. Variants P.7a, P.11a, P.11c, and probably also one P.11g got into the armament of the Polish Air Force. At the time of introduction into service, they represented progressively designed and very powerful machines. In 1939, however, they were hopelessly obsolete and considerably worn out by the service. 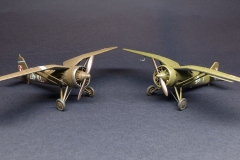 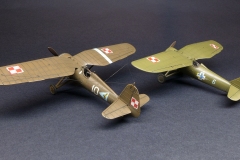 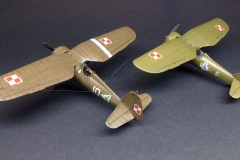 Anyone who remembers toy stores before 1989 in what was then Czechoslovakia will surely remember the ugly box with a strange drawing of something green, containing a tree with strange moldings, a glue container resembling a miniature garbage can, and black and white construction instructions in a train ticket size that cost 10 CZK. This was a rendition of PZL P.11c in 1/72 scale, for which we had the nickname “Plzák” (“Slug”). Like everyone back then, I built “Plzák”. It was also for a long time the only  PZL P.11 in 1/72 scale. Better times began with the release of various versions of PZL fighters by Special Hobby. In the years 2017-2018, the Polish company Arma Hobby released the PZL P.7a and P.11c kits, which qualitatively meet today’s standards and exceed the Special Hobby kits. I was inspired to build the fighters with the Pulawski wing for the planned PZL thematic exhibition at the model show in Tovačov. And what PZL model to choose for a build? There was a simple answer to that, the best one, Arma Hobby kit. I started with PZL P.7a. The construction went quite smoothly. The model fits beautifully together and after including the photoetch from the Expert set package, it is also sufficiently detailed. Unfortunately, it also has some shortcomings. In my case, there were the deformed undercarriage wheels and some panel lines on the fuselage. This rescribed those lines and also riveted the fuselage according to scale drawings. As for the undercarriage wheels, it was worse. In the end, I got wheels from a friend’s surplus. Another thing I improved was control rods of the flaps on the wing and drilling the handles in the wing in front of the cabin. I tried to choose some attractive camouflage. Unfortunately, the Polish pre-war air force is dominated by shades of khaki. In the end, I chose the Zygmunt Kinel’s machine belonging to the 151st Fighter Squadron from September 1939. There is a nice article about this aircraft on the Arma Hobby blog. It also reveals an inaccuracy in the instructions for the position of the wing insignia on the Zygmunt Kinel’s machine, which I did not notice soon enough 🙁 I used the colors recommended in the instructions. On the lower surfaces of the wings: Hataka C036 – blue-gray, on the fuselage and top of the wings: Hataka C018 – US Olive Drab, which is to represent a medium variant of Polish khaki. I applied the decals from Cartograf, attached the suspension strings of the undercarriage, made some light weathering, and sealed everything with varnish. Done. 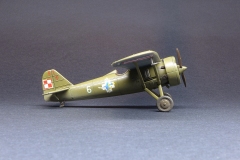 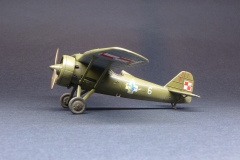 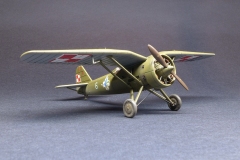 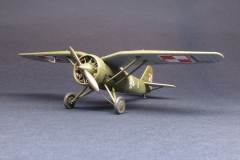 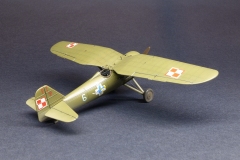 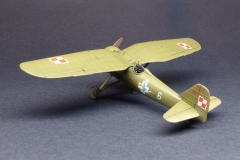 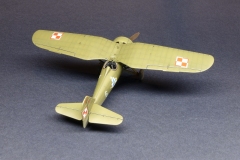 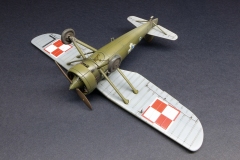 Under the impression of the construction of PZL P.7a, I started to build the PZL P.11c in the Expert variant. Again, I can confirm what I wrote above about the PZL P.7a kit. A perfectly fitting kit and with PE parts from the Expert set, the modeler gets almost everything he needs to build a detailed kit. Unfortunately, some minor imperfections are present here as well. One of the mistakes is the indication of a corrugated surface in the break of the wing in front of the cabin. This was easy to fix with sanding. There were some sink marks on the fuselage and again, deformed undercarriage wheels 🙁 So additional puttying and sanding. I replaced the engine and the engine cowling ring with a modified one from the IBG PZL P.11a kit. The original one from the Arma Hobby box didn’t look detailed enough. This was followed by the addition of rivets, reinforcement strips on the fuselage made from aluminum foil, and rudder control rods. As for the choice of camouflage, it was the same as with the P.7a, khaki again 🙂 In order to differentiate the individual types of Pulawski fighters visually, I chose a machine with a darker khaki color: P.11c of Hieronim Dudwal of the 113th Fighter Squadron, September 1939. This time I studied historical photography more than in the case of PZL P.7a 🙂 Again, I used Hataka paints. On the bottom surfaces of the wings: C036 – blue-gray, on the fuselage and top surfaces of the wings: mix 1/1 of the colors C010 – Dark Polish Khaki and C011 – Light Polish Khaki. The shade of C010 recommended by the instructions seemed too dark to me, and after several attempts with several shades from different manufacturers, I ended up with the one mixed from dark and light Polish khaki by Hataka. The location of the decals this time was completely in line with the historical photographs. This was followed by a light weathering, gluing of the radio antenna wire, and a position light above the pilot’s headrest.

That’s all, I hope you will like the result. Thanks to David Henyk for the photos. 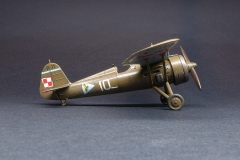 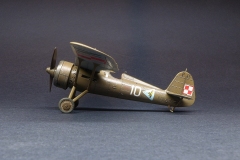 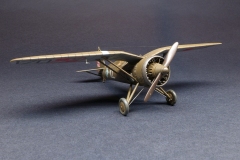 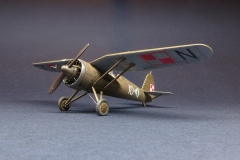 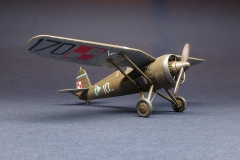 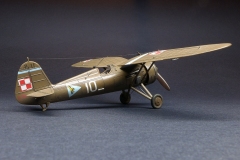 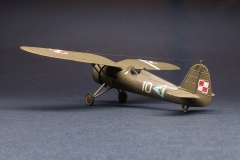 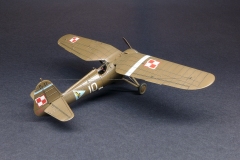 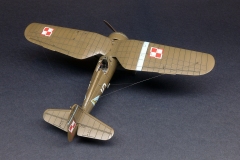 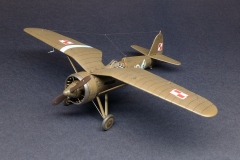 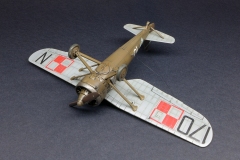