Boulton Paul Defiant was one of the aircraft types flown by famous Czech night fighter pilot F/O Vlastimil Veselý. In the year 1941 Veselý was assigned to the 96 Squadron RAF. There is a nice in-flight photo of Defiant ZJoK with F/O Veselý in the cockpit. Here you can find the whole story (in Czech language), including the photo mentioned above: http://aces.safarikovi.org/revi/Jan.Safarik-One.of.The.Few.pdf

Well, I decided to build that aircraft as a part of a “deathmatch” build with my friend. The point was to start and finish any kit from our stashes within one month. I am glad we both managed it.

The build itself was straightforward. Airfix is a really good kit. I didn´t face any issues except those caused by my own hands 🙂 I needed to use an aftermarket AML set containing correct 6-tube exhausts and ZJoK decals. I also used aftermarket resin guns. Unfortunately, I think the ZJoK letters are not accurate, on the photo they look thinner. Finally, I toned down the grey color of the letters by a thin layer of black. 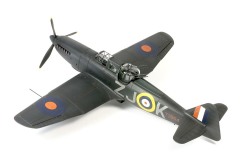 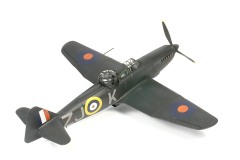 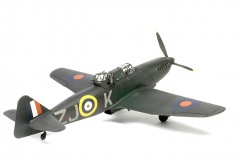 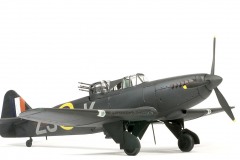 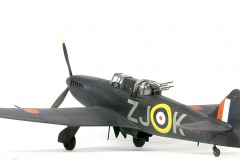 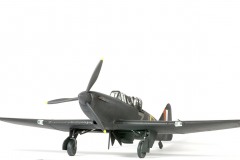